The story of Liberty Lake and Greenstone

What was it about Liberty Lake that made it ideal soil for the vision of Greenstone, and how do you view Liberty Lake as a continued part of the Greenstone identity?

When we started Greenstone as a company, some 30 years ago, the vision for the Meadowwood planned community was already in place. The real vision for the community came from Bill Main, and he is the one that attracted Hewlett Packard and provided the private funding for the initial Liberty Lake sewage treatment plant. When we started working in Liberty Lake in the early 1990s, we shared with Bill Main the vision for a mixed-use walkable community. That vision was also shared by the Schneidmiller family, which farmed and owned the land.

The circumstances that enabled the growth of Meadowwood into the Liberty Lake community were unique. A vision for the community was in place, the LLSWD had the sewer and water capacity to support growth, and, most importantly, the Schneidmiller family had the patience to see the vision though.

The early years of developing in Liberty Lake were a learning experience. A strong sense of community existed in Liberty Lake when we started development, and we saw firsthand the benefit and power of people working together to create a better community. Those early experiences helped us form an understanding of how you create lasting value in a community, and that has carried over in our work across Eastern Washington and North Idaho.

Our focus in Liberty Lake is now in the River District, where we are working hard to build on the value we see in strong communities.

You’ve lived with those ugly kitchen countertops for a decade. Should you replace them now that you’re ready to sell your house? That’s not a simple yes or no question, says Scott Thompson, a certified real estate appraiser whose work has taken him inside hundreds of homes in the Spokane area.

Thompson doesn’t put much faith in across-the-board industry estimates of the resale value for specific home improvements designed to attract buyers. Rather, he suggests sellers take an objective look at their property in relationship to others on surrounding blocks.

“For the best value, aim for a house that is up to neighborhood standards but not the fanciest house on the block,” Thompson says. “Take the middle path.”

In a high-end neighborhood that might mean tackling significant improvement projects. Typically, though, the best use of dollars is to freshen what you have, because “buyers don’t want a house that feels worn out.”

“It’s the boring stuff like paint and carpets that gets you the most bang for the buck” when it comes time to sell, Thompson says. “Bigger home improvements don’t return as much in value, generally speaking.”

Of course, remodeling isn’t strictly about dollars and cents unless resale is in the immediate future. Real estate appraisers say it’s perfectly valid to consider “value in use,” meaning investing in a home to improve its livability and comfort. 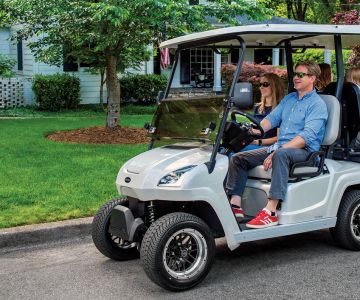 From our story about Liberty Lake trends

What is it?
This golf cart delivers extraordinary elegance off the course as a street legal, personal transportation vehicle. Comfortable for four passengers (with 2- and 6-passenger options also available), the Sirius surprises with how much it offers in the way of smalltown driving. Equipped with LED headlights with high beams, taillights, brake lights, self-canceling turn signals with side mirror indicators, lockable glovebox and trunk — even an optional back-up camera upgrade! — all that’s left to do is drive across town to take in a summer movie at Pavillion Park.

Why is it popular?
The Sirius has become hugely popular in safe, recreation-heavy communities like Liberty Lake because Star EV decided to make it specifically for the road in addition to its role for the golf course. Manufacturers in the industry have long focused on fleet golf cart demands, which often strips vehicles down to the basics. In 2015, Star EV launched an internal program called Project Tiger with the specific goal of transforming the standard golf cart ride by focusing on features people might expect from a luxury car. This combined with one of the most innovative suspensions ever designed for a golf cart make the Sirius the best ride for both the road and the golf course.

In addition to the vehicle-like features previously mentioned, the Sirius also boasts a much longer range than the typical golf cart or personal transportation vehicle. An example of the power savings is in the LED lights, which use five times less energy than traditional halogen lights to help you travel further without worry.

Wow factor
The Sirius is named after the brightest star in the night sky for a reason. Star EV was serious about outshining the competition from day one, when an experienced automotive designer was brought in to work alongside Star EV engineering and manufacturing teams to make sure each step would lead to a new level of luxury styling.