When you think of food prepared fresh by a trained chef with years of experience, you probably aren’t thinking about gas station fare. Yet that’s exactly what’s offered in the northwest corner of Liberty Lake Chevron through Frannie’s Kitchen.

People walking in for the first time often expect prepackaged items that have been sitting in a food warmer for who-knows-how-long.

“That’s not what this is,” said Fran Stevens, the 10-year Chevron employee and longtime Liberty Lake resident behind Frannie’s Kitchen. “It’s not been sitting there for hours. You always have people who are prejudiced against gas station food, and we just have to fight the stigma.”

For someone with culinary training and experience working in catering and for resorts, Fran might seem overqualified for the job, but she loves the community environment, repeat customers and ability to surprise people with what they can find inside their local convenience store.

“Once they come in, they come back, and they tell their friends,” she said. “I just have to get them in the door.”

After establishing a loyal lunch crowd with gourmet grilled cheese sandwiches served from 10 a.m. to 2 p.m., Liberty Lake Chevron expanded this past year to provide breakfast offerings from 7 to 10 a.m. The combination of fresh-made food with grab-and-go convenience was already a hit, and a crowd of breakfast regulars formed quickly.

Owner Don Douglas said credit goes to Fran, who works behind the register for Chevron when she’s not behind the grill a few paces away. Fran makes the burritos and sandwiches to order, usually while visiting with the customer. She uses hearty meats, real cheese and fresh, store-bought ingredients she hand-selects. Customers also love her homemade cookies.

In addition to the Southwest Breakfast Burrito, Fran said morning commuters love grabbing the Three Little Pigs — a ham, bacon and sausage burrito — and the Southern Style, highlighted by sausage and gravy.

Lunch standouts include grilled-to-order specialty sandwiches from the Pulled Pork and Cheddar, to the Italian, to the ever-changing Specialty Sandwich of the Week.

“It’s not what you would expect from a gas station,” Don said of Frannie’s Kitchen. “We don’t know what’s next in her fresh kitchen, but we know it will taste great!” 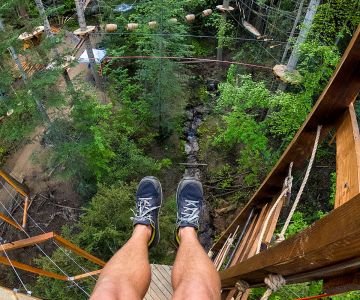 What is it?
Think Ewok village, but better. This aerial trekking park launched in 2018 upgraded what was already a super-successful zipline business. The aerial park is a high ropes course in alpine trees featuring several stations participants move among at their own pace and choosing. As such, the park is as challenging (or not) as the participant chooses, adding a greater degree of Ninja Warrior-style difficulty as you climb higher into the trees. Regardless of the obstacle, participants remain securely strapped into the cable system as they move across rickety bridges, up rope ladders or swing like Tarzan through the trees.

Why is it popular?
There is a reason Mica Moon is the top-ranked outdoor activity in the area on Trip Advisor. In fact, with over 700 reviews, only 12 are not five-star (and none of those are below 3). While the zip lines (such as the 50+ mph “Big Mama”) still attract most of the attention, the aerial park is showing up in reviews with comments like “amazing,” “very well designed,” “super safe” and “a blast.” Diane wrote, “Can’t believe I did it! I’m usually afraid of heights, but the aerial park was a blast and a confidence builder. Thanks to our guide for all his help and encouragement.”

One side benefit that shows up in a lot of reviews: It’s great exercise that “I didn’t know I was getting.” Proven fact: That is the best kind of exercise.

“It makes the most awesome birthday party or team day out/bonding event ever,” he said.

Wow factor
With the spectacular views and the amazing obstacles, this answer may come as a surprise, but the “wow factor” has to be the guides. The people who run the park, from owners Rik and Heidi Stewart all the way through the whole team, absolutely make the experience. Whether it’s fun trivia, a timely joke, the sense of safety or just that perfect dose of motivation and encouragement, Mica Moon wouldn’t be the experience it is without the people. 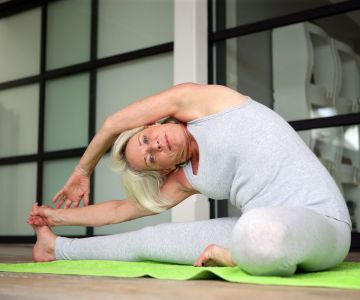 What do line dancing, an 88-degree pool, wine and cheese socials, pinochle, chapel services and concerts all have in common?

They are among dozens of regular activities at Evergreen Fountains intended to “promote and enhance our residents’ health and vitality,” as the mission statement reads.

For Spokane Valley’s Arger family, which opened Evergreen Fountains in 2008 and has seen it through several expansions since, the winning formula has always centered around living out the facility’s tagline, “Where living well is a way of life.”

They do this by encouraging residents to enjoy their own individual lifestyle centered around a holistic philosophy of personal wellness: physical, mental and spiritual health.
“There’s a reason so many active seniors choose Evergreen Fountains,” said Leasing Director Gene Arger. “Our residents believe in living well, and we provide the amenities to help them achieve their personal wellness and fitness goals. We have a great team to provide assessments and programs customized to each resident. And it’s such a fun atmosphere. Our goal is for residents to regain their independence.”

This philosophy has come with significant investment. While the facility employs an experienced nursing staff, much like many facilities that provide a range of independent to assisted living options, Evergreen Fountains also employs an in-house pastor as well as a nationally certified senior fitness specialist.

The fitness programs are coordinated in the facility’s state-of-the-art Wellness and Fitness Center, which includes a warm-water swimming pool, therapy spa, strength training equipment, ellipticals, exercise bikes, treadmills, balance balls and much more, with individualized programs that range from water aerobics to yoga to circuit training.

As they look to provide continuity of care for seniors, the staff at Evergreen Fountains emphasizes three components for evidence-based senior exercise, which they adapt to each individual’s specific health needs: aquatic exercise, balance and strength training.

Arger said the best way to learn more about how the Evergreen Fountains experience can benefit you or your loved one is to schedule a tour by calling 922-3100 or visiting evergreenfountains.com.