One of my all-time favorite gifts was a few simple words placed in a frame. Pictured below, it’s a reminder my wife had custom-designed for me by our friend, Brittany White. This is the story behind it …

I was Skyping with a pastor in Uganda who has become a dear friend. Ronald’s church was preparing to take a pair of special offerings. One was for an 11-year-old girl whose leg was being eaten from the inside by a parasite and would need to be amputated if funds could not be raised for medical treatment. The other was for a region a couple hours south of his church that was especially hard hit by this year’s dry season. He was asking his people to give money, food — whatever they could.

“People are literally starving,” the pastor told me. “What is very sad is that the government is not coming in to help. But we have a responsibility as Christians to come in and help.”

“I’m sorry, I’ve got to stop you right there,” I said. “You’ve told me a good offering at your church is $20. The vast majority of your congregation is unemployed. Why would your church help? Don’t you have enough needs of your own?”

“In America, you have an expression that doesn’t make sense to us in Uganda: ‘You are what you eat.’ If that was true, we would all be matooke — a field of matooke. But we have a similar expression in Rutooro: ‘Oli eki ekyokugamba oli.’ It means, ‘You are what you say you are.’

“When I have visited America, I have been amazed at all the generous people. But there are also some people who always think they need more. My goodness, there are children who are complaining they have six pairs of shoes, and they want daddy to buy them another pair. I have some children whose Sunday best is barefoot, and they are walking 5 to 10 miles to church barefoot in the rain. Sometimes on empty stomachs.

“If you are materially wealthy, if you have six pairs of shoes, but deep inside yourself you still think of yourself as poor, it is very hard to give. You never go beyond what you think you are.

“There are people who materially they are rich, but they are poorer than anyone you can think of, because they think it is all about me. Being rich comes from the heart, not from the outside. When you view your wealth as coming from the outside, you begin to see you are not rich enough. You find a hurting person and don’t even help. You think of yourself instead, because you say, ‘I do not have enough.’

“‘Oli eki ekyokugamba oli.’ You are what you say you are.”

Being rich comes from the heart, not from the outside.

Whenever I visit and hear him speak, I like the way Pastor Ronald talks about Jesus, whose humble birth similarly turned the definition of riches on its head. He told the rich young ruler to give everything away, lectured on greatness by washing dirty feet and built a Kingdom not with palaces and power but with grace and truth and love.

In short, he knew we needed help with that ultimate definition we all grapple with: our identity, our “oli eki ekyokugamba oli.” Oh, to be rich from the inside. 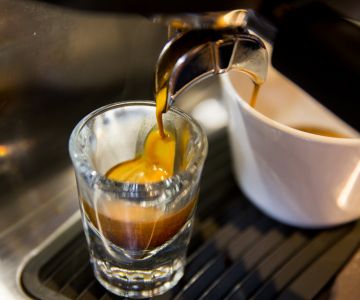 A. Another word for coffee

B. A particular type of coffee bean

C. A way to prepare coffee

D. An Italian method for ironing clothes when you’re late for work

While espresso is just another method to brew coffee among dozens, it has become the crema the crop when it comes to coffee consumed outside the home. Most of the staples of a coffeeshop menu have espresso-prepared coffee as their base.

Do you love yourself a cappuccino, americano, latte or mocha? They are all made with shots of espresso.

Where does the word espresso come from?

The word itself has Italian roots, meaning “pressed out.” When you brew coffee espresso-style, that’s exactly what happens — the coffee is pressed out. “Espresso” also has meanings that refer to speed, which makes sense when you consider it shares roots with the English word, “express.”

Pressed out in a hurry? That’s espresso.

How is espresso prepared?

Espresso is a strongly brewed coffee produced by forcing near-boiling water through a bed of finely ground, packed coffee. In fact, the coffee bed is packed so tightly that water won’t make it through without help. With espresso, a machine is used to produce the targeted amount of pressure in the precise amount of time to pull the perfect shot.

How did espresso get its start?

Remember Expo ’84? Probably not, cause the one I’m referring to was held in Turin, Italy, in 1884. Even then, drinking coffee at cafes was all the rage in Europe, but the process for brewing it was slow. Angelo Moriondo wanted to get coffee out to crowds in a hurry, so he invented a way to use steam power to brew coffee more quickly. The processes of producing the appropriate amount of espress-ure have come a long way since then, but Moriondo can rightly be remembered as the father of espresso.

Why did you tell that lame joke about crema earlier?

One of the popular features of espresso coffee is crema. Italian for “cream,” it refers to the layer of foamy goodness that tops this shot of coffee. This happens because of high pressure and carbon dioxide and blah blah blah.

You know what, let’s not spoil the mystique of crema. It’s a happy miracle.

So far, we’ve learned espresso is most officially a method of brewing coffee birthed and popularized in Italy.

But the machines used to make it? Espresso machines.

When a roaster develops a blend meant to be used as espresso? It’s an espresso roast.

And, most notably, that perfect brown liquid pressed out into a small cup? That’s a glorious shot of espresso.

Are there different types of espresso shots?

Basketball has the jumper, the free throw, and the layup. An espresso machine makes different types of shots as well: espresso, ristretto, and lungo.

Espresso is the standard bearer.

Ristretto is Italian for “restrict,” and the idea here is that the amount of water used to produce the shot is restricted — while the amount of coffee remains the same. The goal is to produce a stronger, albeit smaller, brew of coffee.

Lungo is the opposite. Italian for “long,” this shot uses double or more the typical amount of water. The resulting brew is not overly popular as it typically comes across as overdone, spoiling the nuance of the coffee. Lungo does pull more caffeine because of its longer brew time, however, and it’s not without its supporters.

Next week: Touring the espresso menu

This is the sixth in a 10-part series, “Coffee for the Average Josh,” releasing Fridays this fall. Get your fix of Coffee 101 by signing up to receive an email when the next post drops. 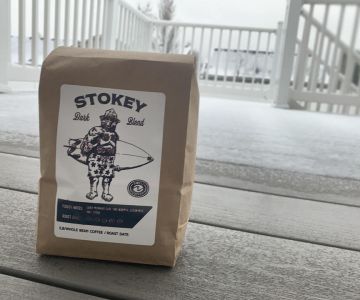 This week, my longtime friend Josh Jensen surprised me with a bag of the new Stokey Dark Blend he just launched with Shane Thompson, owner of Swell Coffee.

Talk about filling the appreciation mug for Thanksgiving week. Kim and I have loved every sip. Great friend. Great coffee. Grateful.

As we teeter between Black Friday and Small Business Saturday, Christmas shopping and local businesses are both on the mind. If there ever was a year to support your neighborhood coffee shop, this is the one. Gift cards to a favorite shop are a great way to go. But in honor of the Stokey Dark Blend — and in honor of finishing our “Coffee for the Average Josh” series next week with an article on brewing at home — here are links to eight local coffees on my list that were roasted in the greater Spokane area:

Next week: “Brewing coffee at home”

This is the ninth in a 10-part series, “Coffee for the Average Josh,” releasing Fridays this fall. Get your fix of Coffee 101 by signing up to receive an email when the next post drops.

Beautifully said. Beautiful written. And even more beautifully life-changing if applied. Thank you, coffee. Please also extend my thanks to Josh.

Thanks for your kind response, n@! (Sorry for my delayed reply. Coffee finally let me know about this comment… 😉 )

Okay, now THAT has me thinking…